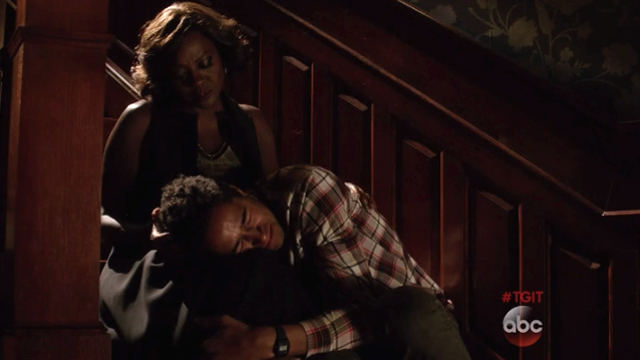 For those of you who watched the winter finale of ABC’s Thursday night hit sitcom, How To Get Away With Murder, last night was certainly an emotional roller coast, right? We have been waiting for weeks to get a definitive answer to the question, “Who shot Annalise?” If you have not seen the finale yet, don’t read any further because I’m about to spoil it for you: Wes shot Annalise!

Many of us who watch the show faithfully have been suspicious of Wes from the beginning of the season. Admittedly, Wes has been one of my least favorite characters since I started watching the show late last season. He has always appeared sneaky and underhanded to me and I’m not a fan of those kinds of people, in movies, sitcoms or real life. However, after last night’s episode—especially the last ten minutes of the episode—we see that Wes may be a little more complex of a character than we once thought.

It’s easy to label Wes as a sneaky trouble starter, but not so much for me now after the brief flashback that we were allowed to see of Wes’ childhood. From the flashback, we can deductively reason that Wes has experienced some level of trauma. We can assume that his mother was the victim of some type of tragic death while he was young, which led to the flashback scene of him being questioned at what appeared to be a police station. We can also assume that Annalise has been knowing him since he was a child because she was a part of the flashback, Lauryn Hill braids and all.

There has been suspicion around the dynamics of him and Annalise’s relationship since the last season [attachment styles–Google “TRAUMA BONDING”]. He and Annalise definitely have a history and we got to see more of that last night. They have so much history that she knows him by his real name, Christophe, which actually saved her from being “finished off” in the dramatic cliffhanger scene.

We all may have picked up on different minor details from the brief flashback scene but why is any of this important? I’m often accused of being overly analytical [don’t take me to the movies with you], but that character trait works for me. I get paid to be this way. As a therapist who currently works mainly with the child and family population, I see last night’s episode as a great time to address childhood trauma, which is a growing epidemic in this country.

As I browsed the hashtag, #HTGAWM, I saw quite a few tweets that labeled Wes as “psychotic”, “crazy”, and the like. Even some wishing he would die soon, however I looked at it from a deeper, more clinical perspective. I compared him to almost innumerable amount of kids who have experienced a trauma in their life that has caused them to be separated from their birth parents and families and placed into the “system”. They too are often labeled because of their behaviors. They’ve been stigmatized.

Whether we like it or not, our past helped to shape who we are today. Our past does not have to define us, but it does influence our personalities, the way we think, the way we behave, who we trust, the way we conduct ourselves in relationships, the way we view the world and so on.

When we see a child, or even an adult “acting out”, our first thought is to label them as bad, evil or some other negative term. A trauma informed approach is not to ask someone “what’s wrong with you?” but to ask them, “What happened to you?” Every behavior is an attempt to meet a need, whether it’s a positive behavior or a negative behavior. Here is an example I’ve see often over the years. Many children who have been abandoned at a young age have had to steal food to survive because their parents or caretakers did not care enough to feed them. To them, stealing isn’t wrong; it’s survival. It’s adaptive for them but maladaptive in the “real world”. Many foster parents who adopt children from “the system” are very misinformed about how to deal with these types of behaviors.

For Wes’ character, being “sneaky” has served as a method of survival for him because of his issues with trust [Clearly he can’t trust Annalise, who is obviously a master manipulator]. It’s adaptive for him. It works for him. It has gotten him this far. We should be asking ourselves why does he act this way? What’s the function of these behaviors? What traumas have shaped his personality?

It’s going to be interesting to see what other ways Shonda Rhimes uses the content of last night’s flashback to shape the adult character now known as “Wes”. I personally think his character is a walking time bomb, ready to explode (e.g., being manipulated by Annalise into shooting Annalise…). We may never be able to fully resolve or exhaust the complexities of this relationship, but one thing’s for certain: WE’LL KEEP WATCHING!

Many adults are unstable emotionally because they have not dealt with their childhood traumas, whether “big” or “small”. They act in ways that seem erratic to those who have not experienced what they have experienced. No matter how successful, wealthy or famous they become, they can fall victim to calling dysfunction “normal” and often repeat cycles of abuse and trauma if the root of issues are not addressed. We have all been impacted negatively in some way along this journey called life and no one is above counseling, therapy and the like. You can’t get help for what you don’t talk about.

One thought on “Who Shot Annalise? Childhood Trauma”